Knoxville Named One Of Three Cities To See Economic Recovery 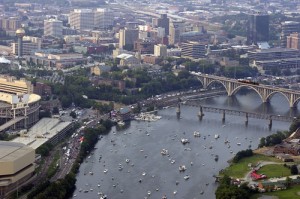 Knoxville has been named one of three cities in the U.S. to have achieved economic recovery in the past three years, according to a recent article published by Reuters. Data for the article was based on a recent study published by Brooking Institute, a Washington based research group. The Brooking Institute also named Dallas and Pittsburgh as the two other cities who had seen economic recovery.

According to the Reuters article, Knoxville achieved economic growth by investing in Knoxville “infrastructure and fostering private investment.”  By using funds received from the 2009 federal stimulus project, Knoxville was able to attract new businesses and keep people working. According to the data from Brooking Institute, this is the first year since the 2007-2009 recession that any U.S. Metros saw any economic recovery.

Previously this year, the area was ranked one of the Fastest Growing Cities and one of the Top Cities For Economic Growth Potential, by Business Facilities magazine. It was ranked #8 on the list of Fastest Growing Cities and it was ranked #10 on the list of Top Cities For Economic Growth Potential. In the article published by Business Facilities, it was described as a city that was “synonymous with growth.” With Oak Ridge National Laboratory and the University of Tennessee, the article dubs Knoxville as “Innovation Valley,” with the potential to create many new jobs in the alternative energy field. Not to mention, the city is home to many major employers including: Scripps Networks, Pilot Flying J, Green Mountain Coffee Roasters, Bush’s Baked Beans, among many more.

The Knoxville area has also recently received nods for job growth and low unemployment rates. This past summer the Knoxville area was been ranked one of the Fastest Growing Cities and one of the Top Cities For Economic Growth Potential, by Business Facilities magazine. This past spring Knoxville was named the Best Places for Jobs, by Forbes Magazine. And, last year, Farragut was also named the Most Business Friendly City in Tennessee for 2011.