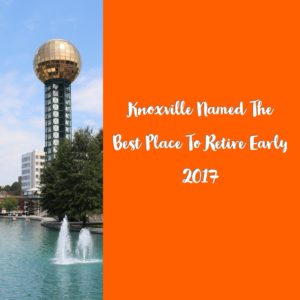 Knoxville has topped a national list once again. This time Knoxville has been named the best place to retire early in 2017 by MagnifyMoney.

In order to find the best and worst cities to retire early, MagnifyMoney looked to find cities with a low cost of living, a good quality of life, and access to employment, if retirees needed to supplement income.  Each city was given a score of 100 possible points. Each of the factors were weighed as follows: cost of living (50%), quality of life (30%), and employment (20%).

Based on that information, Knoxville ranked the best out of 217 cities in America. It scored a 98 on the overall cost of living, 41 on the qualify of life, and 83 on the employment score, giving it an overall score of 78.

To Knoxville residents, it’s no shock that Knoxville appears on another national list. Knoxville enjoys an extremely low cost of living. With Lake Loudon and the Great Smoky Mountains, there are no shortage of outdoor activities. There are also multiple sports teams and thriving downtown Knoxville, meaning there are activities for everyone in Knoxville.

Here is the to 10 list of places to retire early:

Here are the top worst places to retire early:

Should You Sell Your Home Before You Buy A Knoxville Home?